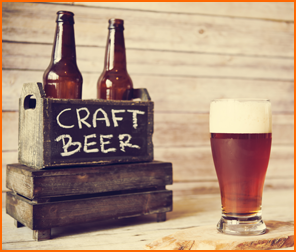 We’ve spoken a lot on the topic of craft beer over the last few months, especially since the government announced their plans to increase exposure of craft brews in the LCBO. Over the last few years in particular, craft beer sales have surged in the province, and beer-drinkers are, now more than ever, opting more often for smaller local breweries for a taste of something different.

Back in July, Nielsen released the results of a poll that examined consumer behaviour and purchasing habits with regard to craft beer. The results are pretty impressive. Here are just a few highlights from the poll, which surveyed more than 1,000 drinkers:

You can read more about the poll here: http://www.brewbound.com/news/2015/nielsen-poll-examines-craft-purchasing-habits?utm_source=Brewbound&utm_campaign=4baadd9b26-mailchimp&utm_medium=email&utm_term=0_6026cb3473-4baadd9b26-168857761.

So, when it comes to craft beer and consumer behaviour, what do these results mean? Firstly, competition is rising, and with more breweries opening up and more craft brew being purchased and consumed, buyers are becoming more selective. They know what they like and why they like it, but they are also willing to try new brands.

How to compete: aside from taste, your brand packaging is one of the most important things to consider when it comes to influencing consumer behaviour. As mentioned, drinkers are willing to try something new, and if your packaging is unique, engaging and eye-catching, people will be more likely to pick your brand over your competitor’s.  Your packaging carries your distinct message that sets you apart from your competition.

At PTI, we have experience designing and manufacturing custom packing for craft beer – packaging that grabs attention and influences consumer behaviour. We can help you compete. Call us today at 1-800-303-5883.